Underground at The Barbican - 5 October 2011

Anthony Asquith’s silent film with a score by Neil Brand

Silent film is closer to opera than much contemporary cinema. Its combination of images and musical accompaniment requires an emotional engagement and concentration that can create an immersive experience. Also, with silent film we are often reclaiming a neglected history and rediscovering lost works and lost stars. Hence, like opera, its appeal to enthusiasts and obsessive fans.

Neil Brand had a great success in the Barbican Hall in October 2010 with his full-orchestra score to accompany Alfred Hitchcock’s Blackmail and tried to repeat the trick here with the world premiere of his 85-piece orchestral accompaniment to Underground, a 1928 British film directed by Anthony Asquith. His score was commissioned by the Barbican Centre, the BBC Symphony Orchestra and the British Film Institute. The latter has also created a stunning new print.

Asquith is a very different director to Hitchcock. Those who know him only through the rather theatrical and staid later films such as The Winslow Boy, The Millionairess and The VIPs will be surprised at the vigour, daring and virtuosity of his silent films such as Shooting Stars (set in a British film studio), A Cottage on Dartmoor and, especially, Underground. The silent era represents his most fertile period. Like Hitchcock, his interests at the time embraced the sophisticated artistic cinema of Germany, France and Russia and also the well-made qualities of the popular Hollywood film. Asquith’s early films now seem like a compendium of silent-film technique delivered by an emerging virtuoso in love with the medium of film. Contemporary critics thought he was flashy and Graham Greene later said that he “was always more tricky than imaginative.”

Underground is one of his most atmospheric and rousing films as well as one in which the European influence is most felt. It is a working-class love-story set on the Underground where Bill, a London Underground porter, and Bert, an electrician, both fall in love with a shop assistant, Nell. Things worsen with the introduction of Bert’s disturbed girlfriend Kate and the film ends in an almost Expressionistic nightmare. Asquith handles the melodrama with some sophistication and a range of means. 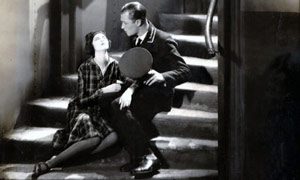 The film opens like a documentary as a train, shot with the camera mounted on the front carriage, approaches a crowded platform. Asquith views the Underground as a teeming public space with crowds thronging its passageways and escalators. (Fritz Lang’s Metropolis never seems too far away in Asquith’s hymn to 1920s’ Modernism.) The film also paints a detailed picture of the public spaces, parks, riverside walks and pubs of London in that decade. The psychological aspect of the film calls on German Expressionism with the incisive, geometric angles and dense shadows that convey heightened mental states, and the rapid editing reflects Soviet montage. Asquith uses a range of devices to create a subjective viewpoint, as when Bill’s fist is launched virtually through the camera as he and Bert fight over Nell in a pub. This image is then replayed again and again in Bert’s mind as he decides to exact his revenge. The film climaxes with an extended chase through Lots Road Power Station and the tube which would be exceptional even by today’s standards. It’s a dark romance that also gives a detailed but poetic picture of 1920s’ London. Underground is a tremendous film and one of the hidden gems of British silent cinema.

Nevertheless, the film, with these juxtapositions of social spaces and mood, heightened emotional states and working-class comedy represents a challenge to a composer. Underground is a much less cohesive work than Hitchcock’s Blackmail with many changes of mood and runs the risk of being uneven and unwieldy. Neil Brand, who is also probably Britain’s greatest silent-film pianist, as he did for Blackmail, for much of the time echoes the lush, impassioned scores of Bernard Herrmann, Franz Waxman and Miklós Rósza from the Golden Age of Hollywood, with nods to Malcolm Arnold and William Walton. However, with Underground he has to supply a much greater amount of light music to match the comedy in the first part of the film, such as a hornpipe for a sailor in a crowded carriage. Arnold’s ability to transfer popular song into orchestral high spirits is evoked in these moments, such as when “Where did you get that hat?” makes an appearance in a scene in a millinery shop. It could be argued that Brand is occasionally too knowing in his musical references but he invariably has a sense of humour and a concern for theatrical effectiveness.

The orchestral texture of Brand’s score is rich and frequently dark. The film opens with an overture of sweeping harps and chiming bells and then the main love theme appears over the titles. The teeming escalators, shot from below to emphasise a cathedral- like quality, have a shimmering, cascading, almost Philip Glass-like theme for the full strings. Jazzy, syncopated rhythms illustrate the pub sequence. The score gives shadowy prominence to harp, piano and vibraphone. A melodeon replicates the sounds of a harmonica played by a boy in a park. A solo piano plays the love theme over quietened strings to create an introspective quality. As with Blackmail, Brand doesn’t just use music to tell us what we see, but uses music to tell us more than film can show in describing what goes on inside people’s minds and outlining their emotional states. Bert’s humiliation and desire for revenge are described with churning strings and grinding brass. Kate is first characterised by a sinister cor anglais and later by pizzicato strings to show her anguished state of mind. The extended chase sequence has a tense energy and driving, hammered rhythms that propel the piece to its melodramatic conclusion. To pursue the operatic parallel, Brand’s score has a verismo quality.

The score's orchestrator Timothy Brock conducted and the BBC Symphony Orchestra played with flexibility and great passion. Brock had to exhibit precision and clarity to ensure that the orchestra hit its cues for points involving bus bells and door-knocks. He drew a frenzied response at climactic moments with emotional throbbing strings and powerful brass and ensured the sustained energy for the chase sequence. This was another good and enthusiastic house for a British silent film with full orchestra at the Barbican. There are a number of other candidates for the Neil Brand treatment – Hitchcock’s The Ring, The Farmer’s Wife, and The Lodger, Asquith’s Shooting Stars and A Cottage on Dartmoor, E. A. Dupont’s Piccadilly (with the great Anna May Wong).

Anyway, after Underground, travelling home on the Piccadilly line will never be the same again.