orchestrated and conducted by Timothy Brock,
commissioned by Cinema Ritrovata, Bologna,
first performed in the Piazza Maggiore, Bologna, on July 1st 2008 by the Orchestra of the Teatro Communale.

‘…the Piazza Maggiore late-night screenings featured another awesome sight: an audience of 5,000 hooked on every twist of the silent version of Hitchcock’s Blackmail accompanied live by Neil Brand’s first score for full orchestra, a Herrmann-esque creation pulsing with fear and desire. Spectacular.’ 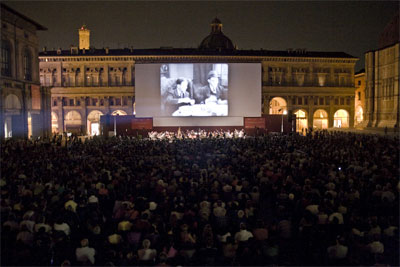 ‘I’ve seen Blackmail many times but never like that – Neil Brand’s score was amazing, it picked out so many details that you might miss without the music being there, and it really brought the film to life… this odd coincidence of people and light and chemicals trapped in this medium but somehow being conjured back to life before our eyes and ears in that [performance] was extraordinary.’

'Movies need viewers, and Bologna's biggest events were saved for the open air of the Piazza Maggiore, where at 10pm every festival night 5,000 seats beckoned delegates and Bolognese alike.

Tuesday night was a particular thrill: the silent version of Hitchcock's Blackmail, accompanied by the premiere of Neil Brand's especially commissioned new score, arranged for full orchestra by Timothy Brock.

As night set in, and the piazza gazed up at Anny Ondra's unravelling date in 1929 London, Brand's echt-Hitchcockian motifs and harmonies folded us right back into the drama, with all those commingling Bernard Hermannn and Miklós Rósza references in tow.’ 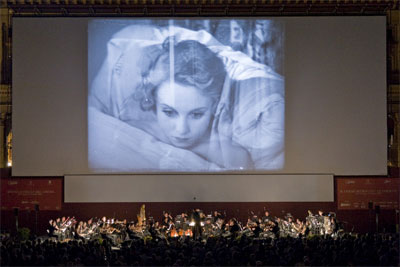