“Silence is weird” is how Neil Brand introduces us to his one man show. 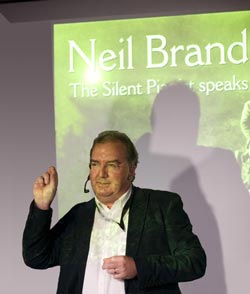 Neil has been a silent movie pianist for over 25 years. Who would have known that prior last year’s Oscar winning film the Artist that there was a market for his style of entertainment? However Neil has forged a very prosperous career in this art form and since the Artist his trade has become en vogue and he has become in even more demand.

There is nothing weird about Neil Brand. He is a very talented musician and very knowledgeable on his subject. From the moment he ambles on stage and starts talking, you feel at ease. Neil is an amazing orator and despite the theatre environment you feel that you are down the pub with your mate having a beer.

By his own admission, Neil sees inanimate objects, emotions and even weather phenomenon in terms of music. During the show the clips are shown on screen and he plays the piano along to the action. At times you almost believe you can hear the words being said, all just by the use of piano music. You can see he has an amazing passion for what he does.

Neil uses clips from classic cinematic moments from over the last 100+ years, interspersed with epithets about his career. His wit is very dry and his anecdotes are relevant and laugh out loud funny. He would not be out of place on the stand up comedy tour circuit. He managed to pack a lot into the 80 minutes that the show ran without it being rushed, there are so many stories that he told. However the story of how he first came to be a silent movie pianist and the one about the drunk Italian who fell into the pit during a film are particularly funny and had the whole audience laughing with him.