Neil Brand has been a silent film accompanist for over 30 years, regularly in London at the Barbican and BFI National Film Theatres, throughout the UK and at film festivals and special events around the world, including Australia, New Zealand (three times), America, Israel, Sweden, Denmark, France, Germany, Ireland, Luxembourg, and, in Italy, the Bologna, Aosta, Bergamo and Pordenone festivals where he has inaugurated the School of Music and Image to teach up-and-coming young pianists about silent film accompaniment. 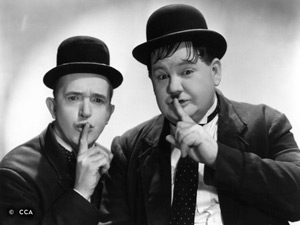 Training originally as an actor, he has made his name as a writer/performer/composer, scoring BFI video releases of such films as South (Shackleton's Journey to the South Pole), The Ring by Alfred Hitchcock, Piccadilly (premiered at the Lincoln Centre) the great lost film The Life and Times of David Lloyd George and Early Cinema. His most recent DVD scores are for Sherlock Holmes (the great lost Gilette film), Ozu Classics for Criterion and, for the Cinematheque Francais, Maison du Mystere, Le Brasier Ardent, Les Adventures de Robert Macaire and Mauprat.

Neil now has a very fruitful relationship with the BBC Symphony Orchestra which has resulted in London performances of his acclaimed orchestral score for Hitchcock’s silent Blackmail (commissioned by Cinema Ritrovato, Bologna), the BBCSO / Barbican commission to score Asquith’s silent Underground, released to great acclaim theatrically and on Blu-Ray/DVD by the BFI and Chaplin's Easy Street (released on DVD/Blu-Ray). He followed these successes with two through-scored radio adaptations, The Wind in the Willows (Audio Drama Award Nominated) and A Christmas Carol for Orchestra, Choir and Actors commissioned by Radios 3 and 4 – all of these works orchestrated and conducted by maestro Timothy Brock. His Blackmail score was performed at the British Museum in a reduced ensemble arrangement for the London 2012 Hitchcock 9 Festival, and subsequently played the New Zealand Film Festival and was performed on the Odessa Steps last year before an estimated crowd of 25,000. It will play five times in four different countries this year.

Neil is also a prolific radio playwright including Sony- and Tinniswood- nominated dramas Stan (which he adapted for BBC TV) and Getting the Joke, as well as establishing the regular live-recorded musical series The Big Broadcast. He has twice toured nationally with Paul Merton as well as appearing in, and supplying music for, Paul’s silent film-related TV documentaries. He appeared in Ken Loach’s The Wind that Shakes the Barley and played the role of Ted the garage owner in the BBC2’s soap opera for the deaf Switch. Recently he has toured to Edinburgh Fringe, Finland’s Midnight Sun Festival, Padua Opera House, Kilkenny comedy festival, the Middle Eastern International Film Festival and throughout the UK and abroad with his hilarious and touching one-man-show The Silent Pianist Speaks.

Neil is becoming well-known as a TV presenter on BBC4 with his hugely successful series Sound of Cinema, The Music that Made the Movies and Sound of Song, is a regular presenter on Radio 4's Film Programme, a Fellow of Aberystwyth University and a Visiting Professor of the Royal College of Music and is considered one of the finest improvising piano accompanists in the world.