Score (2008) by Neil Brand,
orchestrated and conducted by Timothy Brock,
performed in the Barbican, London, October 31st 2010 by the BBC Symphony Orchestra 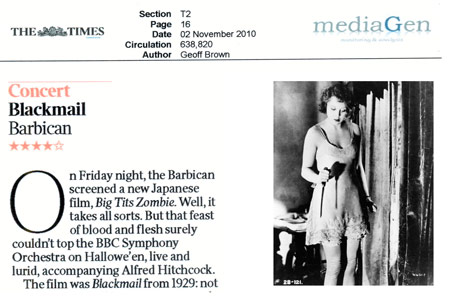 On Friday night, The Barbican screened a new Japanese film, Big Tits Zombie. Well it takes all sorts. But that feast of blood and flesh surely couldn't top the BBC Symphony Orchestra on Hallowe'en, live and lurid, accompanying Alfred Hitchcock. The film was Blackmail from 1929: not the pioneering talkie version scattered with brilliant inventions and elocution letter vowels, but the silent edition prepared at the same time for British cinemas not wired for sound. The music, receiving its British Premiere, was supplied by Neil Brand, our most renowned silent film accompanist. Often he improvises at a piano; here he luxuriated in a composed score and the full symphonic palette , from slithering bass trombone to the celeste's ghostly icing. He also luxuriated in Hollywood's past, Blackmail might be rooted in a recognisable 1920's London of newsagent shops, humble housing and Lyon's Tea Rooms; but the score came bathed in memories of Hermann, Ròzsa, Waxman, composers from Hollywood's golden age. Brand's other spot references were cheeky but adroit, like the tiny snatch of Dixon of Dock Green - matched to a policeman trundling outside while Annie Ondra's heroine, facing an emergency in a creepy artist's studio, finds a new use for a bread knife. Spiritedly conducted by Timothy Brock, deviser of Brand's full orchestration, the BBC musicians pitched into the score with flair and obvious enjoyment. If at times Brand thumped us or twiddled his thumbs, he was only reflecting the film. 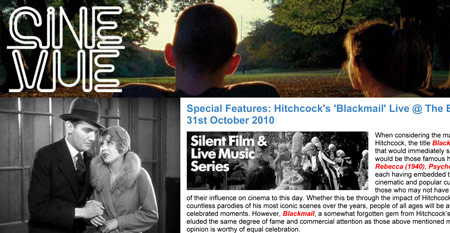 When considering the many great works of Alfred Hitchcock, the title Blackmail (1929) is, for many, not one that would immediately spring to mind. Far more likely would be those famous household titles, such as Rebecca (1940), Psycho (1960), or The Birds (1963), each having embedded themselves firmly into the fabric of cinematic and popular culture to such an extent that even those who may not have seen these films are well aware of their influence on cinema to this day. Whether this be through the impact of Hitchcock on the world of horror or through countless parodies of his most iconic scenes over the years, people of all ages will be aware of Hitchcock’s most celebrated moments. However, Blackmail, a somewhat forgotten gem from Hitchcock’s formative years, seems to have eluded the same degree of fame and commercial attention as those above mentioned movies. A movie which, in my opinion is worthy of equal celebration.

Blackmail, Hitchcock’s dark and twisted tale of moral ambiguity follows Alice White (Anny Ondra), a woman who murders a rapist in self defence. Her boyfriend, Detective Frank Webber (John Longden) finds what he believes to be the only piece of evidence linking her to the crime. Unfortunately for them, a wanted criminal known as Tracy (Donald Calthrop) is also able to place Alice at the scene of the murder. What ensues is a story of blackmail and ethical complexity culminating in a finale that I will not spoil now for anyone wishing to see the film.

This Halloween I had the great privilege of attending a screening of Blackmail at the Barbican Centre. Accompanied by an original score by Neil Brand, performed by the BBC Symphony Orchestra and conducted by Timothy Brock, the results, I am glad to say were absolutely stunning. Brand’s score somehow manages to provide additional tones, textures and layers to the piece, enhancing each of the elements that made Blackmail such a success in the first place. Its moments of impending danger and mystery are rendered all the more chilling by the orchestration of Timothy Brock, with moments of subtle, understated tension offset majestically by moments of sharp, power and intensity reminiscent of Psycho's iconic 'shower scene'.

In 1929, Alfred Hitchcock made two versions of his thriller, Blackmail - one silent and one with dialogue, which became the first British sound-on-film talkie. Although the sound version is better known, I long ago gave up on it because although Hitch threw in some cheeky audio gags to show off how unspeakably ace he was, he still didn't really know how synchronised dialogue was going to work and as a result the film drags like a self-refilling bucket of boring.

A few weeks ago, I went to London's Barbican to see the silent version of Blackmail, with a new score performed by the BBC Symphony Orchestra and written by tipples topples movie legend, Neil Brand. It was totes amazaboggles, and looked and sounded a bit like this, only a bazillion times bigger, louder,  and betterer.

In Alfred Hitchcock's Blackmail, Alice White, (Anny Ondra) is the bored girlfriend of a dour Scotland Yard detective, with no interest in going to the moves as she's 'seen it all before'. As a rejoinder to her indifference, cinema's greatest sadist swiftly despatches one of his very first blondes into the hands of a seductive painter, whose attempted rape is scuppered when she frantically kills him in self-defence.  Still not satisfied that his audience's desire for originality and innovation has been sated, he makes another film. It's also called Blackmail, but this one comes with synchronised sound.

It is both Hitch's last silent film and his first talkie. Filmed in 1929 in two versions, released a couple of months apart, it straddles cinema's first great revolution.  The silent version of Blackmail has long remained the lesser known of the two, so it's particularly heartening to see such a large audience attend its screening at the Barbican. That said, there's no doubt the main draw is the new score by Neil Brand, performed on stage by the BBC Symphony Orchestra.

The Bioscope - Review of Blackmail at The Barbican

Your scribe journeyed last night to the vasty cavern that is London's Barbican Hall to witness something of a landmark event - the first British silent drama to be newly scored for full orchestra wince the advent of the sound film. The film was Aldred Hitchcock's Blackmail (1929), the score was by Neil Brand, the orchestrator and conductor was Timothy Brock, and the music was played by the BBC Symphony Orchestra. (The qualification of 'silent drama' needs to be added, because the documentary The Battle of the Somme (1916) was given the full orchestral treatment back in 2006, with score by Laura Rossi, played by the Philharmonia Orchestra at the Queen Elizabeth Hall in London.)

Blackmail has a place in every film history book as the 'first' Britis sound film (it all depends on how you define things as to whether you agree with that or not), but a silent film version was made at virtually the same time and with almost the same cast, for all those cinemas that had yet to convert to sound. For many yeasr, the silent version was forgotten about, but screenings in recent years have brought it increasing recognition, to the point where we are ready to agree with Hitchcock himself that the film is superior to the sound version. Whether it is Hitchcock's best sient film is a matter for debate, but it certainly shows his mastery of the silent film form. It flows along with an easy, artful flow; it is choc-a-bloc full of memorable pictorial compositions; and it sets up complexities of relationships and moral dilemmas that make one disappointed when the film ends relatively tamely, albeit with hero and heroin nurturing their guilty secrety that is left strikingly unresolved.