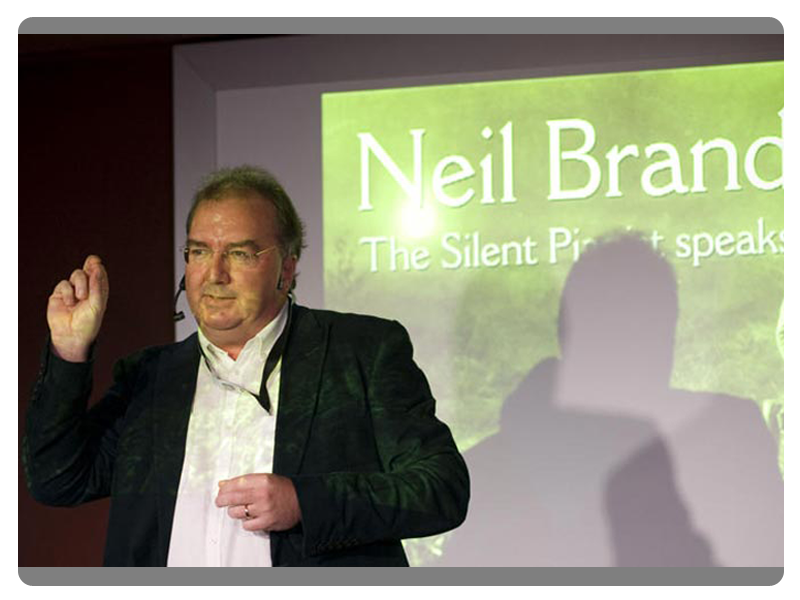 ASSISTED BY THE TRILLING WIT AND POLISH OF BRAND'S LIGHTNING-FINGERED ACCOMPANIMENT, THE SHEER FINESSE OF EACH SUCCESSIVE SLAPSTICK SELECTION WORKS ITS MAGIC ON THE AUDIENCE AND THE LAUGHTER FLOWS MORE AND MORE FREELY”
Telegraph 2007“

‘BRAND'S SKILL AND CHARISMA AS A PERFORMER ARE UNQUESTIONABLE.’
Three Weeks

‘THIS IS A SHOW WHICH IS NEVER EVER DULL AND YOU ARE IN THE COMPANY OF A MASTER OF ART AND TECHNIQUE.’
one4review

‘WHETHER YOUR INTEREST IS MUSICAL, HISTORICAL, FILMOGRAPHIC, OR NONE OF THE ABOVE, NEIL BRAND IS CERTAINLY WORTH YOUR TIME’
Edinburgh Guide 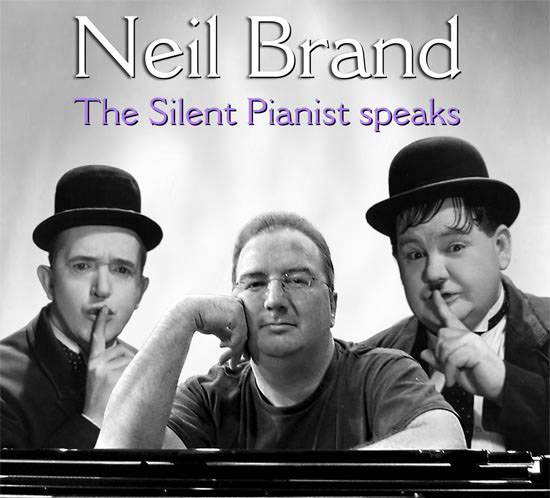 Fresh from co-starring with Paul Merton in the UK tour of Paul Merton’s Silent Clowns, Neil Brand, the ‘doyen of silent film pianists’ (Radio 4) is proud to present his own critically acclaimed show. The Silent Pianist Speaks is one of most unique and memorable shows you will see. It left both audiences and critics at this year’s Edinburgh Festival Fringe in far from silent awe of the great filmmakers of the Silent Era and the magic of the accompanists who breathed life and sound into their work.

Neil uses clips from some of the greatest moments in silent cinema to illustrate his 25 year career and the special place of music with silent film.

From the earliest, earthiest comedies and thrillers, through a silent cine-verité classic shot by a young Billy Wilder, which the audience gets to score, to the glories of Hollywood glamour and the sublime Laurel and Hardy, Neil provides improv accompaniment and laconic commentary on everything from deep focus to his own live cinema disasters. As well as taking a sidelong glance at his own globe-trotting 25-year career he investigates how music works with film by inviting the audience to score a love scene and culminates by accompanying a clip ‘sight unseen’ whilst simultaneously describing his reactions to it.
The result is a hilarious, sharp and ultimately moving show about cinema and music which pays tribute to the musicians of the silent era through the observations of one the world’s finest exponents.

Having trained originally as an actor, Neil has been accompanying silent films for over 25 years, performing regularly at the NFT on London's South Bank and film festivals and special events throughout the world. He is considered one of the finest exponents of improvised silent film accompaniment in the world.

He has written the title music and scores for many TV documentaries including Paul Merton’s Silent Clowns, Silent Britain and Great Britons and scores for over 50 Radio 4 dramas including War and Peace, The Box of Delights, several of the BBC audio Shakespeare Collection plays and Sony award winner A Town Like Alice. Neil is also highly regarded as a writer of radio plays including the Sony-nominated Stan, which he adapted in 2006 to great acclaim for BBC4 TV.

He has appeared with Paul Merton across the UK in Paul’s show, Paul Merton’s Silent Clowns and also across the UK and US with his first show, Where Does the Music Come From? He has appeared, among other places, at Finland’s ‘Midnight Sun’ Festival, Trafalgar Square, Padua Opera House and Kilkenny Comedy Festival while his orchestral score for the 20s chiller The Cat and the Canary was the highlight of the 2007 New Zealand Film Festival. This year he is scoring Hitchcock’s ‘Blackmail’ for a 60-piece orchestra for the Bologna Film Festival.