Sunrise is, strictly speaking, not a silent film. It was released on September 23rd 1927 in a Hollywood already paranoid about the arrival of sound - almost simultaneously with Al Jolson's revolutionary talkie The Jazz Singer and, above all, it was released with a synchronised soundtrack which meant that the music was the same wherever the film played. 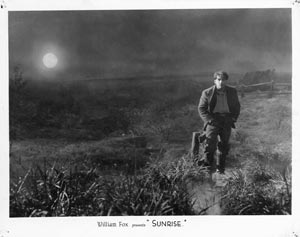 This was the whole idea of sound technology in movies anyway - nobody wanted to hear the actors speak, but if you saw a movie with a full orchestra playing a specially composed score, then saw the same film with a trio improvising something unconvincing, you would see two different movies. The studios needed a system which would rationalise the music wherever the movie played. Hence synchronised soundtracks, Warner Brothers and "You ain't seen nothin' yet". Sunrise still looks like a silent movie, has intertitles and purely visual narratives, and the music can be stripped off and replaced with live music.  But why do that?

I am an improvising silent film pianist. I have been doing the job for fifteen years to the best of my recollection, and in that time must have played hundreds of movies. From 1895 to 1927, every style, genre and duration of film was attempted in every country of the globe, from the 30-second slices of life of Lumiere's pioneering movies, to trick films of Melies, the first story films of the 1900s, the documentaries and epic Griffiths of the teens, the German expressionists and golden age Hollywood product of de Mille and Von Stroheim, Keaton, Chaplin and Fairbanks and the agitprop greats of Soviet Russia. India, Indonesia, China and Japan had indigenous silent film industries, some on Hollywood lines, some defiantly not. About a third of all silent films ever made have survived to this day; and I think that Sunrise beats them all. Except for the score.

I started playing for silent movies because I was asked to - in 1984 the Eastbourne film Society was showing Buster Keaton's Steamboat Bill Junior and wanted live piano. Knowing I played, and liked movies, they left me with a projector and the print for two weeks - the first performance was like coming home. I played my improvised score to an audience laughing so hard they had to remember to breathe, the hour and a half sped by in seconds, and I finished convinced there was a career to be had in this game. I was auditioned by the National Film Theatre and embarked on a course of on-the-job training which has proved invaluable. Playing the film at sight was a discipline worth learning - reading ahead to stay one jump ahead of the audience, giving character nudges in the music as each character evolved and grew, staying safe until the director had thoroughly displayed his hand, then playing with all the confidence of a thousand rehearsal viewings. I got used to the first unexpected shocks, sudden murders, intertitles saying "We will now sing the Latvian National Anthem", or requirements to play some classical piece that you didn't know but were convinced everybody else in the cinema did. Above all I craved the sublime feeling of riding on the coat-tails of a masterpiece, in tune with it in every possible sense, like a gambler who just knows the next roulette number to come up.

I became addicted to the atmosphere in the cinema, the sense of an audience at first puzzled by the unreality of these musically flooded images - then the imperceptible click as they settled in to the story, the palpable silence as they became hooked, the moments in which the music drew attention to itself and then tucked gently back in behind the action, never too obtrusive, never overstaying its welcome and always trying to serve the needs of the film like a faithful retainer fussing round a still sprightly dowager. And, at its best, the combination of piano and movie gave rise to moments when one could feel hairs rising on the back of the neck as the film made its point with crystal clarity, as the lovers eyes met, or Keaton topped even his funniest gag, or one's worst fear came to life - the laugh of recognition, the tiny gulp of suppressed emotion, the expectation of an outcome that was anything but predictable. When these happened the music was undoubtedly part of the equation - the visuals and music were working as one organic whole, bridging a seventy, eighty or even a hundred-year old gap, with a blend of pioneering painstaking and modern musical immediacy to create an utterly unique art form - not cinema with the sound turned down but opera without words, music and pictures as delightful as the ballet, as engrossing as a novel, as mercurial and unique as a snowflake.

I have a great deal to thank the silents for - they have taken me to every corner of the world, festivals in Australia, New Zealand, Israel, the US and throughout Europe. They have opened innumerable other doors for me, commissions to write music for the theatre, TV, radio and film - in short they have furnished me with something I never expected as a freelance composer - a regular income. I started life (and continue) as an actor, and the sheer theatricality of silent cinema is what appeals - the piano is playing all the parts, or perhaps just one part, the one you don't see, the narrator tucked just outside the frame. The silents have provided inspiration for my musical Talking with Mr. Warner, which has just won the Ken Hill prize and is now going through the uphill struggle of finding an audience. But then silent films are themselves just finding a new audience, a younger generation willing to accept these movies on their own terms, who enjoy the aesthetic while still appreciating the age and mores of their creators. Original live scores are being painstakingly pieced together and new scores are being written, which is important for the movies to appeal to an audience in another hundred or even a thousand years time.

Which brings us back to the score for Sunrise. What's so wrong with it? Why should an upstart pianoplayer decide to go back to basics on this movie and ignore the score that the director, one assumes, sanctioned? Well, this Hollywood film by German genius F.W. Murnau is a complex, warm, deeply felt and brilliantly told story of love and betrayal, disillusion and redemption set contrastingly in a hauntingly realised lakeside village and a bustling cityscape. I have never played this film with less than awe, both for the sureness of its handling and the superb performances of Janet Gaynor and Charles Farrell. I have never known it to fail with an audience, it sweeps them along from the first images, and musically is more inspiring to a pianists best efforts than any other film I know. The score, to my mind, is none of these things, a compilation of tunes of the day and less than inspired original music which does not begin to scratch the surface of this lovely film. Not that I believe I can, necessarily - but I claim the right to try.

This movie is best enjoyed in the live world of the silent film, not the dead one of scratchy, synchronised soundtrack. I cannot remember the last time I played Sunrise, and that makes the prospect all the more exciting - like becoming reacquainted with an old friend who still has all the character and personality that you remember, but can still surprise you with a turn of phrase or gesture. Accompanying Sunrise will be like accompanying a terrifying operatic diva - the music must be accurate and brilliant or nothing. The piano, uniquely among instruments, to my mind, allows the water imagery that runs throughout this movie to have its full impact, slow, stately and unremitting one minute, light and dancing the next, violent and cathartic the next. Murnau's camera glides through the actions of the characters, seemingly ungrounded - even the city looks like the waves and eddies of a great delta. The film allows the music to breathe, to carry its weight, and rewards a sensitive impressionist performance. If you have never seen this film before I can promise an absolute treat. If you have never seen silent film with live piano before I can promise you a gripping introduction to a new art form.